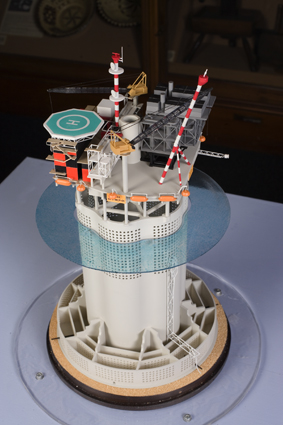 The name 'MCP' is usually considered to stand for 'manifold compression platform', some early documents occasionally described it as a 'midline compression platform' or a 'manifold concrete platform'. The number was to distinguish it from possible additional platforms in the area, but were never built.was placed at a mid-point along the Frigg Transportation System and had four main functions:

The topsides were constructed by Sir Robert McAlpine at Ardyne Point, Argyll, Scotland. The jacket was built in Sweden by Doris Engineering. It was a concrete gravity structure, meaning that it remained on the seabed due to its own weight of 386,000 tonnes. Pre-stressed concrete was used because it could withstand the severe weather conditions in the North Sea. The upper 37m of its outer wall has 1282 holes, each 1.5m in diameter creating a 'wall' to dampen the impact from waves.

Concrete Drilling Platform 1 (CDP1) was a drilling and production installation in the UK part of the Frigg Field. Like MCP-01, it was a concrete gravity platform, meaning it was held in position on the seabed by its own 205,000 tonne weight. 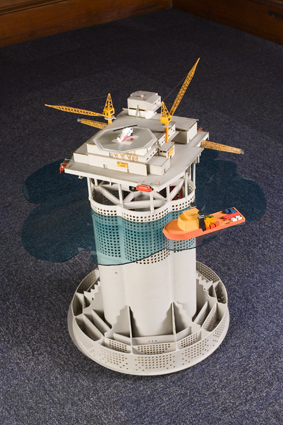 It was originally designed and built to be the manifold platform (MCP-01). However, the drilling platform's jacket (the structure that rests on the seabed and supports the deck and drilling facilities) was lost during its installation in October 1974. The plan had been to raise the structure into a vertical position, lower it until its feet were about 5 metres above the seabed, then manoeuvre into its final location. After the jacket had entered the water, one of its buoyancy tanks collapsed and the structure began to sink. The rising water pressure ruptured the remaining buoyancy tanks and the jacket hit the seabed. Two of its legs were bent by the force. Salvage attempts were unsuccessful.

At that time, the concrete jacket intended for MCP-01 was undergoing construction. To prevent a major delay to the start-up of gas production, it was decided to convert the partly-built MCP-01 into CDP1.

This pig was used in the Frigg Transportation System from the North Alwyn Bravo Platform to St Fergus Gas Terminal. Pigs are so-called because of the screeching sound made by early pigs when travelling through a pipeline. 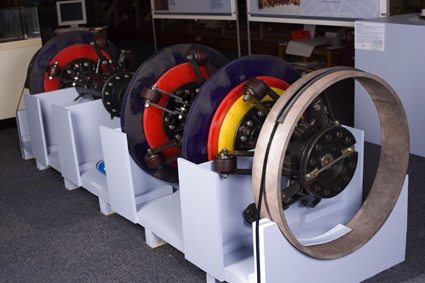 Rather than having its own motor, the pig is propelled by the moving gas in the pipe. As well as being used to clean the pipeline, this pig can also detect dents and areas of debris build-up.

This innovative pig has a special multi diameter design and weighs approximately 0.7 tonnes. It takes 40 hours to travel the 286 mile distance, including 68 miles of 24 inch pipe before joining the Frigg 32 inch pipeline where it also has to navigate junctions and the MCP-01 bypass.

Total owned two of these pigs and this one had already travelled along the pipeline. It also spent time being modified and tested in an onshore test loop. To make sure that the pipes can continue to transport gas for many years, this pig was also used to tow thickness inspection equipment behind it to inspect both the 24 inch and 32 inch pipe wall thickness. 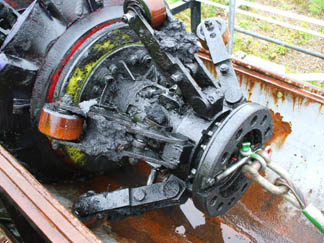 The front module consists of the bumper nose, two seal packs and two suspension systems. The bumper nose has a steel bar across its nose to help it to be retrieved. The suspension systems seen on the front and rear modules are used to centre the pig in the pipeline. Within the front module is a Weatherford Smart Acquisition Analysis Module (SAAM). This is a battery powered unit that senses and records its environment so that it can locate and assess areas of debris, dents in the pipeline, record pressure and temperature. 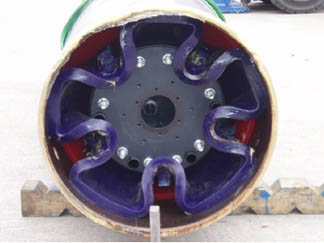 When the pig is in the 24-inch section of the pipeline the blue 32-inch seal folds into a clover type shape, eased into this form by 5 buckle inducers moulded into it. Once into the 32-inch section the blue disc expands and recovers to its original state to create a tight seal in the pipeline.

The rear module on this pig is attached by a ball joint assembly and has a seal pack containing a red 24-inch seal and a blue 32-inch seal with buckle inducers. The rear module of this pig has 'by-pass' ports to allow gas to flow through it towards the front seal pack where it pushes the pig along the pipe. The rear module also houses large magnets that are used to gather ferrous material whilst the pig traverses the pipeline.

The rear module also houses a Nautronix EM Transmitter unit which is used to detect and track the pig when it is in the pipeline. If the pig became stuck, a receiver unit could be used by a diver or remotely operated vehicle to locate the pig. The transmitter works by emitting a pulsed, electro-magnetic field that can be detected through the pipe wall, and to an extent through soils. The unit extrudes from the rear of the pig so the field is not restricted by any magnetic material.

3. Model of CDP1 shown at the Frigg exhibition in Aberdeen in 2008, on loan from the Norwegian Petroleum Museum.

4, 5, 6. A reconnaissance pig used in the Frigg transportation systen, loaned by Total E&P UK for the Frigg exhibition in Aberdeen in 2008.