About the Frigg field

The Frigg gas field spans the UK and Norwegian sectors of the North Sea. The initial projection that approximately 40% of the reserves lay in the British sector proved to be accurate. In 1974, the final agreements were signed between the Norwegian and UK governments. 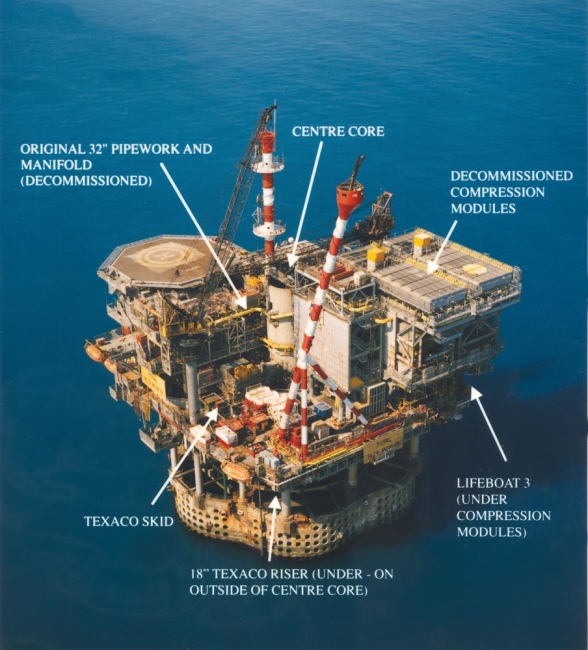 Part way along the pipelines between the Frigg Field and St Fergus - 173 kilometres (104 miles) north-east of Aberdeen - was the MCP-01 platform. It was used to switch gas between the two pipelines, compress the gas and to inspect and clean the pipelines.

MCP-01 was built in Sweden by Doris Engineering and installed in the summer of 1976, becoming operational the following year. It is a concrete gravity type, meaning that the platform is kept on the seabed 94m below the surface by its own 386,000-tonne weight. All but 13,500 tonnes comes from the concrete gravity base, which is 100 metres (328 feet) in diameter and 102 metres (335 feet) tall. The perforated Jarlan wall was designed to protect the central core and has approximately 1250 holes to reduce wave impact.

Like the other Frigg platforms, its name was derived from its function: Manifold Compression Platform number one. Manifolding is the switching of gas from one pipeline to another, for example, if one pipeline required maintenance work. As gas travelled hundreds of miles through the pipeline, its pressure fell, meaning less gas was transported in a given time. 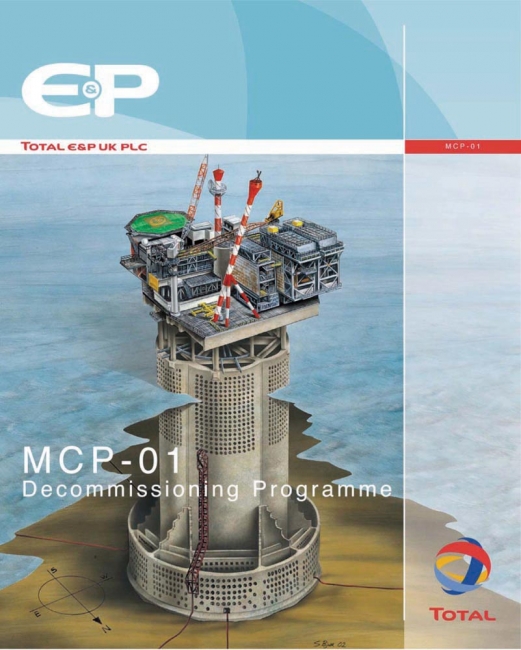 Pipelines are cleaned and inspected for damage using plugs that exactly fit the diameter of the pipe. The squealing noise the plugs make when they travel through pipes gave rise to their name 'pigs'. In the 1970s it was not possible to pig a pipeline as long as that from Frigg to St Fergus in one go, so worn pigs were replaced or refurbished at MCP-01 for the second part of their journey.

As other fields in the North Sea were discovered, it was easier to use the Frigg pipelines to take their gas ashore than construct new ones. MCP-01 provided a link for gas from other fields to enter the pipeline on its way to St Fergus.

From 1992, MCP-01 was ‘not normally manned’, i.e. no permanent presence onboard but with routine maintenance teams visiting regularly. Decommissioning of MCP-01 was originally planned to take place around 2024 once the pipelines passing through the platform are no longer expected to be in use.

However, studies suggested it was not possible to guarantee that an acceptable standard of safety could be maintained until the platform was fifty years old, even with an appropriate level of maintenance work. Plans for decommissioning were brought forward, with assessments indicating that the most viable strategy was to remove the topside facilities and as much of the steelwork for recycling as possible, but leave the concrete substructure in place. 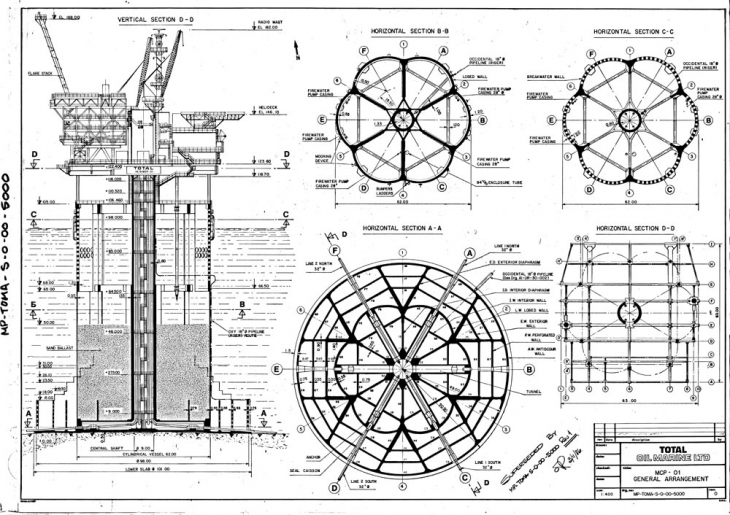 The Frigg Transportation System comprises two 32-inch pipelines carrying gas from the Frigg Field to Scotland. Its construction and installation set world records for both speed and depth - at the time of their construction, the pipelines were the largest ever used at those depths, and as much as 2.5 miles of pipeline were laid each day, a record which remained unbroken until the late 1980s. 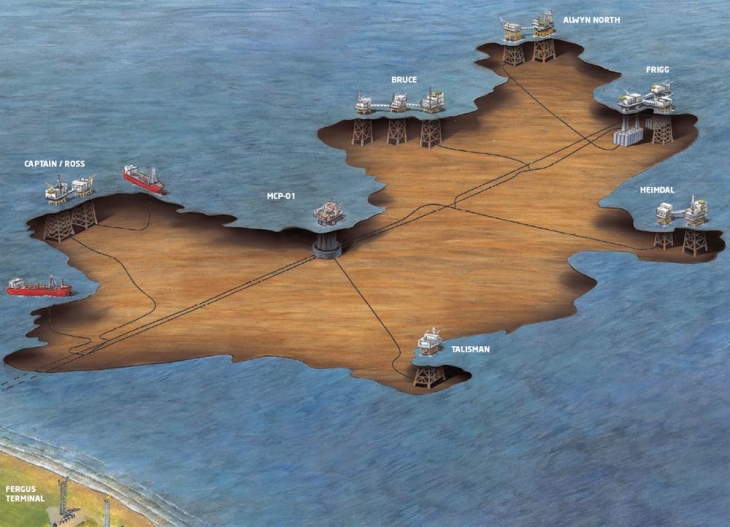 To withstand the incredible pressures and prevent corrosion, the steel walls of the pipes are ¾ inch thick and reinforced with between 2 and 4.5 inches (5 and 11.5 centimetres) of concrete. In places the pipes lie in over 150 metres (492 feet) of water.

Laying two 230 mile-long pipelines in water between 100m and 150m deep pushed technological boundaries in the 1970s. A combination of the great length of pipeline and short weather window (the period when the North Sea is calm enough for work to be carried out) meant that the work began in 1974 and was not completed until 1977. In the brief periods between April and October when the weather was better, crews worked 24 hours a day. 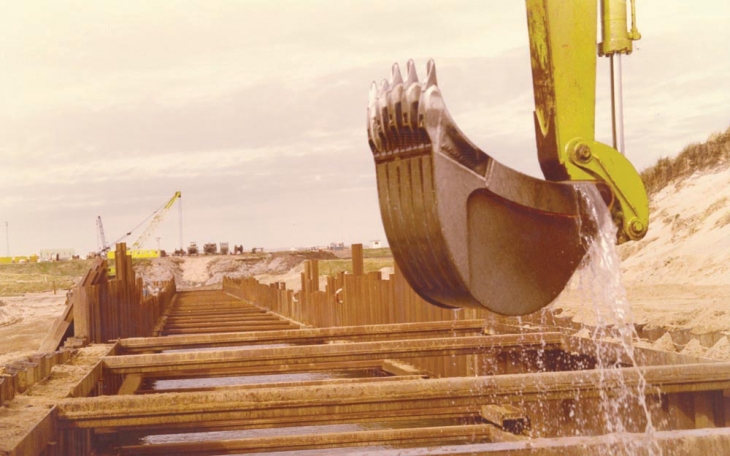 Originally the pipelines carried gas exclusively from Frigg. As production from Frigg declined, other fields were connected to the Frigg Transportation System (FTS). Although Frigg has now stopped production, the pipelines are still in operation. Built with expectations of a twenty-year lifetime, the FTS has recently passed its 30th anniversary of continuous service.

Major works were carried out in the summers of 2004 and 2005 to bypass MCP-01. The pipelines ran through the base of the platform but needed to be rerouted by almost 2 kilometres, as they remain in use after the platform has been decommissioned. 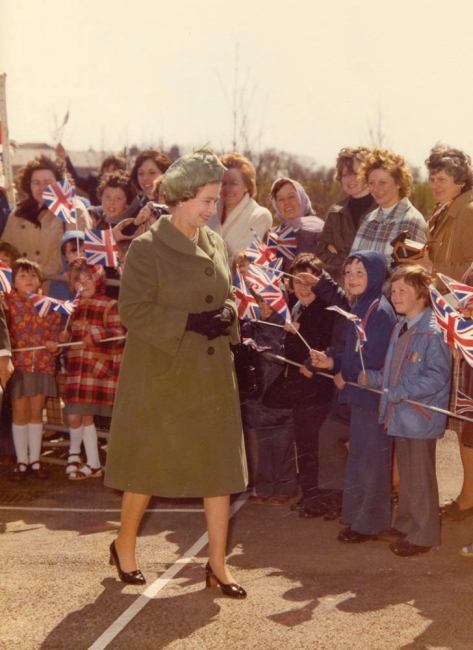 The St Fergus Terminal cost almost £100million to build and had an initial workforce of 160. Today, the terminal is much larger, having been extended since its initial construction in the 1970s. Phase 1 construction took place in 1977 and Phase 2 a year later; during the 1980s, the discovery of gas in the Alwyn and Bruce fields necessitated Phase 3.

The main function of the terminal is to separate the gas from any condensates before the gas is metered and distributed. The liquid condensates are then sent to facilities in Cruden Bay and Mossmorran. Originally, St Fergus supplied gas to just one customer, British Gas, who had their own neighbouring facilities where the gas underwent final treatment before being sent south (such as having the artificial ‘gas’ odour added).

As of 2007, gas arrived at the terminal from approximately 20 different offshore fields. On average, 70 million standard cubic metres of gas, about 20% of the UK’s requirement, is received and processed there daily. The Phase 2 and Phase 3 facilities process gas from the Norwegian and UK pipelines respectively.

1. Aerial photograph of MCP-01, 1994 (MS 3801/1/1/9). The platform was modified several times, with the most dramatic change made in 1992. MCP-01 was changed from having a permanent crew of 80 to becoming 'Not Normally Manned' (NNM). This decision was influenced by the Piper Alpha tragedy, which led companies to reduce the number of people offshore. MCP-01 became the first platform in the area to be operated remotely from onshore, by the St Fergus gas terminal, with security cameras monitoring the platform 24 hours a day.

2. MCP-01 Decommissioning Programme, 3rd draft, 2006 (MS 3801/1/5/2). Although decommissioning was not originally planned until 2024, it was decided that it would be less risky and cheaper to decommission MCP-01 at the same time as the other Frigg platforms. As MCP-01 had not been designed with removal in mind, only the topsides are being removed, leaving the sub-structure in place. As the pipelines leading into the base of MCP-01 were still in use, they were re-routed before work started in 2006. Decommissioning was to be carried out over several years.

5. Graphic showing the Frigg Transportation System (pipelines) connecting MCP-01, the Frigg Field and surrounding fields to the St Fergus Terminal; not to scale; c. 2003 (MS 3801/1/5/8/2). In order for MCP-01 to be decommissioned, the FTS had to be rerouted to bypass the platform. The two bypasses are roughly one mile long. This was a major operation, as obviously no gas could flow through the pipes whilst the work was underway. The UK pipeline bypass was carried out in summer 2004, and bypass work for the Norwegian pipeline in summer 2005.

6. Dune cutting at St Fergus, 1977 (© James Fitzpatrick Photography; MS 3801/2/4/7). The Scottish coast is rocky and subject to strong currents, making coastal pipe-laying difficult. A winch onshore pulled the pipeline in from a barge positioned a mile off the coast. Onshore, sand dunes were removed and the pipelines buried. Once the work was completed, Total and a group from the University of Aberdeen restored the dunes and replanted vegetation to minimise ecological damage.

7. The Queen at St Fergus, 1978 (MS 3801/2/4/5/4). On 9th May 1978, Queen Elizabeth II officially inaugurated the terminal, in front of representatives from the British and Norwegian governments, diplomats and the companies who owned and operated St Fergus. The royal party was given a tour of the terminal and met members of staff, as well as 800 local schoolchildren who had been invited for the occasion.